The Story of a THINKING IMAM

Imam Sajid is an outstanding British Muslim theologian, scholar on Islam and contemporary British Muslims, originally from Pakistan. He came to Britain in 1972, and became the Imam of the Brighton Islamic Centre, in Sussex. He recalls:
‘In 1985 after an interview I gave on local radio I received a letter from a Mr Richard Pearce, who was working not far from my mosque. He had been struck by the interview, he said, and would like to meet me. Not wanting to offend I asked to be excused on account of the pressure of work. However when he persisted I said , “Look, if you can come at 6am, I could spare half an hour.” I was confidant that no Englishman would agree to an appointment at that hour. But my bluff was called – he and his friend David Young agreed to come!
‘For me the great surprise was that both were familiar with Dr Frank Buchman and involved in the work of Moral Re-Armament (now Initiatives of Change). They invited me to meet other friends – then they suggested I might like to go to a conference at Caux, in Switzerland. I warmed immediately to what I found. There were echoes of the world community of common humanity – the UMMAH – which every Muslim believes in and aspires to.’ 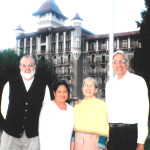 DOWNLOAD The Story of a THINKING IMAM – Pdf Book

The person behind this website is John Munro, a retired publisher and social worker, whose passion now is to preserve people’s memories for the benefit of those who come after. And the author of the book Calm Before Coffee - check the link in the menu, please.        He’s pleased with the number of folk who’ve downloaded titles (there have been 4 134 downloads of the books between June 2014 and January 2021 ), and he’s interested in hearing from more people who’d like to record their memories and convictions on paper. His email is: johnmunro3@btinternet.com